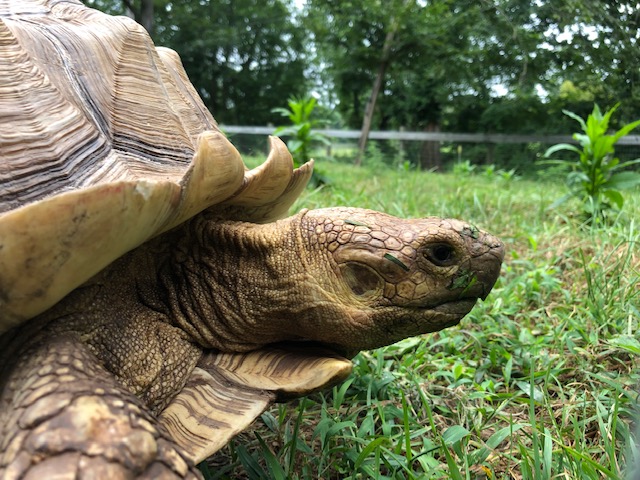 If you’re ever walking by Silkie’s Farm in the summertime, be sure to look for our African spurred tortoise named Squirt.  He is also known as a sulcata tortoise.  He is estimated to be about 16 years old now and full of love!  He is a very social guy and can really make his way around the pasture.  You’ll likely see him doing laps around the perimeter.  The alpacas don’t seem to mind him now but when he first came to the farm they couldn’t understand why such a large rock was moving around the field.  The llama sounded the alarm call and the others got behind her like they do when they feel threatened.  After a while they all figured out how to live in peace together.  Squirt loves grass so in the summer he gets out and has a belly full every day.  Otherwise he will eat kale, strawberries, cucumbers and various other veggies.  We feed him tortoise nuggets too just to make sure we are rounding out his diet.  He doesn’t really need water but we will dip him in a bath every once in a while or put out a shallow dish to see if he’s interested.  In the colder seasons he lives in our boy barn basement where there is a heater and heat lamp to keep him warm.  We love having him here!